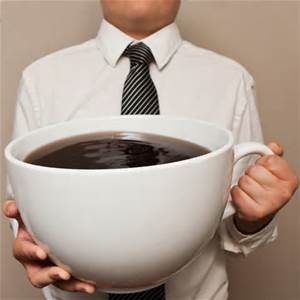 When I was six years old, my grandfather would take me and my brother to work with him. Granddad worked at night as a security guard, so it was no trouble at all for him to let us go to work with him. And it was just the three of us, so needless-to-say, my granddad let us go nuts! And I’m sure we drove him nuts, as well.

We had the best grandfather in the world, just as long as we didn’t tell mom, he would let us swear, we could talk about sex or anything else that we wanted to talk about, and the one thing that mom would have gone crazy if she knew that he let us DRINK COFFEE!

That started a fire that still burns today. My granddad introduced me to the greatest drink ever. And still, every time I take a drink of coffee, I think about those special times. But, back then, I drank coffee because grown-ups drank it and mom would not let us drink it because it wasn’t good for us. I drink for different reasons, now. It really isn’t as bad for you as you think.

I’ve done a lot of research on coffee, and drinking it is not as bad for you, at all, much to my surprise.

What would you say if I told you there was a natural elixir that could lower your risk of diabetes, colon cancer, or Parkinson’s disease? you would think I was crazy, right? It’s true.

Researchers from Harvard University followed data on more than 126,000 people for 18 years, and what they found would surprise the heck out of you. The research found that drinking one to three cups of caffeinated coffee daily can reduce diabetes by single digits. But, drinking six or more cups of coffee per day slashed men’s risks by 54% and more than 30% in women. The more coffee you drink, the better it is for you.

Here’s something else that you may not know. In males, drinking sperm stronger. The studies show that coffee consumption makes sperm swim faster and swim a longer distance. Coffee has actually been linked to infertility. This is a misconception.

Here are a few more points that I’ve found very interesting for you to read. Like both black and green tea, coffee contains antioxidants, which can help the cell mutation which may lead to cancer.

Surprisingly- given that coffee may be a migraine trigger- the caffeine may cure headaches. It is one of the ingredients in some pills because it increases the power of aspirin and other painkillers by as much as 40%.

Coffee consumption is also a brain stimulant. As coffee is a stimulant, it can help in concentration. Last year Dr. Chiara Trombetti, of the humanities Gavazzeni institute in Italy, went as far as suggesting that a morning cup of milky coffee can get sleepy school children off to a good start. However, that is unlikely to be echoed by nutritionists here, who recommended sufficient sleep and a good diet as better ways to cope with the mental demands of the brain.

Coffee even promotes liver health! Though doctors cannot explain the link, studies have shown that coffee drinkers are less likely to develop liver disease, including Cirrhosis of the liver.

Coffee consumption even decreases the need for surgery on gallstones. Women are twice as likely as men to develop gallstones. In one study, women who drank four cups of coffee each day were 25% less likely to need surgery for gallstones than women who weren’t coffee drinkers.

Coffee consumption may actually be good for the skin. Caffeine appeared to improve micro-circulation when applied to the skin in one study, making cellulite look better.

Now, I’m sure my Granddad didn’t take all this information into consideration when he chose to be a coffee drinker. In fact I know he didn’t, he chose coffee because he liked it, but he’s almost 90 years old now, and I would like to think that his excessive coffee consumption had a little to do with him still being around, but in any case, I’m still glad he is.

As always, I hope you found this article both informative and entertaining. Thank you for reading, and may GOD bless you always, and in all ways.