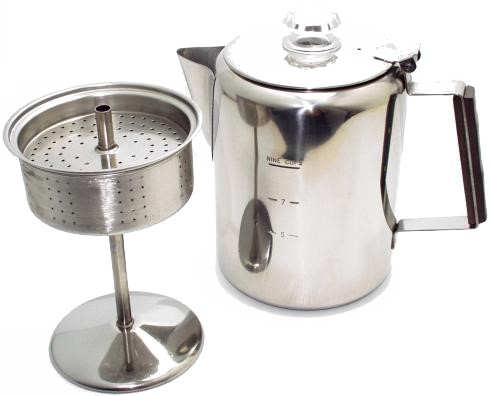 The word “percolator” has come to mean that special coffee pot that used to sit on your Grandparent’s stove and bubble away like mad all morning long. Typically they consist of a heat proof pot that holds the water, a long tube (like a straw) that holds a filter basket at the top. This filter is normally made of metal and holds the coffee grounds apart from the water in the main pot. Usually fairly coarsely ground coffee is used and a perforated lid is placed over the filter in order to distribute the water evenly over the grounds. 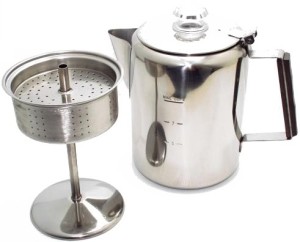 Even though we may hold special memories of percolators, they are not a particularly good way to make a great cup of coffee. In fact many people rank percolator coffee right beside coffee boiled directly in the water! When it is made in a percolator a number of things happen that produce a less than perfect cup of coffee.

For starters, the water is overheated. Boiling water simply extracts too many of the unwanted bitter flavors in the coffee and should be avoided if possible (which isn’t possible with a percolator). Also the coffee grounds become over extracted by repeatedly passing already brewed coffee back over the grounds. Finally the boiling/percolating action of the liquid tends to release many of the desirable flavors and compounds into the air. While this does produce a wonderful aroma of fresh coffee in the house, it can often lead to flat tasting coffee.

In the end, it is often best to avoid percolators if you can. There are other affordable ways of brewing great coffee, even if it may mean turning your back on wonderful aromatic memories. Give the French press a try instead.